2 Kings 5 finds us with this poor little slave girl who wanted to not just serve her master, but she actually looked up to him and her heart broke for him because he was in great pain physically and spiritually. Naaman wasn’t a good master. As a matter of fact, he was a cruel leader who led an army raid that had killed off her whole family and kept her to enslave her. Needless to say, this was not a good employer to be kind to, but for some reason her heart was softened and she prayed for him constantly even through her tears of grief she had for her lost family. (I don’t think I could be that kind of person, if we were being honest)

Naaman was also cursed with having leprosy (word of warning: if you don’t know what this is, it is NOT recommended by this author that you google images of it.) Leprosy is a painful, incurable, flesh eating disease that never ends until you die. No wonder he was in a bad mood all the time. Nothing like part of your finger falling off during dinner to really rain on your parade.

One day while talking to one of the other slaves she mentioned that she prayed that Naaman would be healed. The other woman mentioned she had heard of this man named “Elisha” in Israel that could heal him.

Well, in no time Namaan was in all his flashy armor going straight to the King of Israel, because it just makes sense that the most powerful man  would be the one that would heal him. “Heal me NOW!” he commanded in the King’s presence (Kind of bold if you ask me) But the King replied “I can do many things, but only God heals.”

Coincidentally, a letter from Elisha arrived at that moment summoning Namaan to his house. Namaan got there and a servant came out to greet him and collect his things. “A servant? Doesn’t this man know that I am Namaan?” The servant replied “Yeah, he’s heard of you” Then the servant pointed to a nasty, stinky, murky river and said “You are to wash in there to be healed.”

Namaan would have shook his fist at the servant if there wasn’t a possibility it would fall off. He worked hard to be as great as he was. He did what was expected. He was bold. He was feared. He was way too powerful to jump in a moving sludge river.

Sometimes God asks us to do what seems impossible, just so He can show us that with his love, anything is possible.

A stare down went down between the servant and Namaan. Who was going to budge first? You see this didn’t really have that much to do with the diseased flesh but the afflicted soul of this powerful man. He needed healing, but he needed humbling much more.

The pain of the flesh finally got Namaan to budge first and he went neck deep in the water. Part of the healing was done.

Namaan finally got to see Elisha in his new unblemished flesh and he wanted to put some kind of monetary value on the healing. Elisha shook his head and said “It was God who healed you and you never have to pay for when He touches you.” Namaan humbly went back home with skin renewed and his heart God touched. The last part of the healing completed.

Sometimes when we are afflicted physically and spiritually we pray for a miracle. Sometimes we don’t notice it on ourselves and someone intercedes on our behalf so that we may be made anew. Sometimes the miracle is so simple it’s just an act of faith to prove we are willing to humble ourselves and admit we aren’t as powerful as the Father who watches over us.

We pray for miracles over things all the times, but usually in the times we are hurting. As much as God longs to hear your plea and work his magic, He really wants to just hear from you and know you trust and love His will. A prayer from a single servant girl who had every reason to hate her Master is what it took for a miracle to occur. 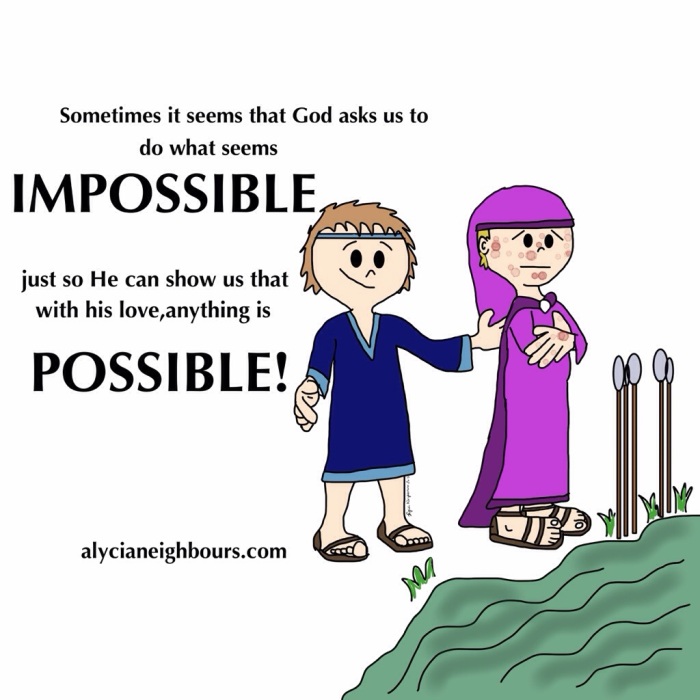 Tags: Faith, healing flesh and heart, only God can do a miracle